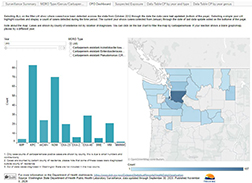 The Department of Health is transforming how we present data. We want to provide the public with information that is easy to interact with and easy to visualize. We created new visualization dashboards summarizing Multi-Drug Resistant Organisms (MDRO) reports, including carbapenem-resistant Enterobacteriaceae (CRE) and other carbapenemase-producing organisms (CPO). These visualizations allow users to:

The data for these dashboards comes from samples submitted and tested through the Washington State Public Health Laboratory, as well as reports from other states made to the Healthcare Associated Infections (HAI) Program. These dashboards display data reported since 2012 and is updated quarterly.

Washington State Department of Health has performed surveillance and testing for carbapenem-resistant Enterobacteriaceae (CRE) and Carbapenemase-producing Organism (CPO) since October 2012.

All reports offerred in PDF format.

This report includes CRE isolates submitted and/or reported to DOH, as well as other non-Enterobacteriaceae carbapenemase-producing Gram-negative organisms identified and reported.