What is vapor intrusion? 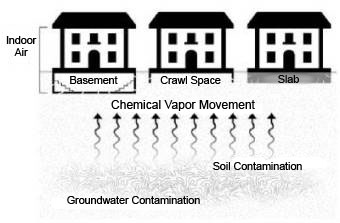 Chemicals that are spilled, dumped on the ground, or leak from an underground storage tank can seep into the soil. If the spill or leak is large enough, it can travel down through the soil and get into the groundwater. When a group of chemicals known as volatile organic compounds (volatile chemicals) are released into soil or shallow groundwater, these chemicals evaporate, producing vapors that travel up through the soil. These vapors can enter nearby homes and businesses through crawlspaces and cracks or other openings in the foundation. This process is known as vapor intrusion. When it occurs, vapor intrusion may cause unhealthy indoor air quality.

What volatile chemicals might enter my home or business through vapor intrusion?

Petroleum products and solvents are common volatile chemicals that can cause vapor intrusion. Gasoline, diesel fuel, and home heating oil are examples of petroleum products. Examples of solvents include tetrachloroethylene (a common solvent used in the dry cleaning industry, also known as "Perc" or PCE), and trichloroethylene (a common solvent used for cleaning and degreasing, also known as TCE). Odors are usually associated with petroleum spills or leaks. However, odors are not usually associated with solvent leaks or spills unless large amounts are released.

What are the health concerns with volatile chemicals in indoor air?

What other sources of volatile chemicals can make indoor air unhealthy?

Some steps you can take to prevent releases of volatile chemicals from products stored or used at your home or business:

What happens if vapor intrusion is a possible problem near my home or business?

When vapor intrusion is suspected, it should be investigated by the party responsible for the contamination. An investigation typically involves testing soil, groundwater, and soil gas (air trapped between soil particles). This testing helps to determine if volatile chemicals might pose an indoor air quality problem.

At many contaminated sites, volatile chemical levels are low and are not considered a problem. Sometimes these levels in soil, groundwater, or soil gas are high enough to cause concerns about indoor air quality in nearby homes or businesses. When a concern about indoor air quality exists, samples are often collected inside homes or businesses. The samples are needed to determine if the volatile chemical levels in buildings are making indoor air unhealthy and whether vapor intrusion might be responsible. Any air sampling planned at your home or business requires your permission.

What happens if a vapor intrusion problem is found?

If soil or groundwater contaminated with volatile chemicals poses a health concern, the most common solution is to install a system that removes the chemicals before vapors enter a home or business. These systems are similar to those installed in homes in regions of the country where radon is an issue and are commonly known as soil vapor vacuum systems.

Soil vapor vacuum systems remove the volatile chemicals from the soil below the foundation by sucking the vapors out of the soil. The vapor is moved through pipes and discharged into outdoor air. If the chemical levels are high, the vapors are treated before being discharged. When these systems are needed, the party responsible for contamination usually pays for them.