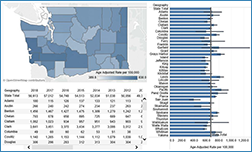 The Department of Health is transforming how we present data. We want to provide the public with information that is easy to interact with and easy to visualize. We created new visualization dashboards that allow users to: Access the new Death dashboards

The United States began using International Classification of Diseases 10th Revision (ICD-10) to classify and code causes of death reported on death certificates in January 1999. The 9th Revision (ICD-9) was used from 1979 to 1998 to report cause of death. The change to ICD-10 created a discontinuity in mortality trends that must be accounted for when comparing mortality data classified and coded using ICD-9.

Cause-of-death data from 1999 onwards are not comparable to 1979-1998 without adjustment for the coding and classification changes. Without adjustment, it is impossible to know whether an observed increase or decrease in deaths due to a particular cause is true or the result of the changes in classification and coding.

The following documents can be used to understand differences in the data due to the change from ICD-9 to ICD-10 and provide a method to adjust for the change.