Marine biotoxins are poisons that are produced by certain kinds of microscopic algae (a type of phytoplankton) that are naturally present in marine waters, normally in amounts too small to be harmful. However, a combination of warm temperatures, sunlight, and nutrient-rich waters can cause rapid plankton reproduction, or "blooms." These blooms are commonly referred to as harmful algal blooms or "HABs" because of their potential to cause illness.

Molluscan shellfish (shellfish with hinged shells such as oysters, clams, and mussels) are filter feeders and ingest any particles, both good and bad, that's in the surrounding water. Algae is a food source for them, and HABs create a plentiful food supply. When shellfish eat toxin-producing algae, the toxin remains in their system; large amounts of algae means more toxin can concentrate in their tissue. Biotoxins don't harm shellfish, but they can accumulate in shellfish to levels that can cause illness or death in humans and other mammals that eat them.

Cooking Does Not Destroy Biotoxins

Cooking will kill the algae that produces the toxin, but the toxin itself is not affected by cooking and remains in the shellfish tissue.

No Antidote for Biotoxin Poisoning

An area may be experiencing a massive bloom even though the water appears clear. A popular misconception surrounds the term "red tide." This term is commonly associated with PSP toxin, but algal blooms that color the water red are generally harmless to humans.

Check Before You Dig

Check the Shellfish Safety Map for beach closures and advisories on the day you plan to harvest shellfish.

We regularly test shellfish for biotoxins and close areas when unsafe levels are detected. Beaches are sometimes posted with warning signs. Don't assume a beach is safe if there are no signs – beach closure signs sometimes "disappear."

Other options to check if a beach is open or closed include:

Mussels accumulate toxins more quickly than other types of shellfish and are a good indicator species, alerting us that levels are on the rise.

Varnish clams accumulate toxin at higher levels than other species. Their proximity to shallow beaches and fresh water sources (and thus potential pollution) are additional reasons to be especially aware of surrounding conditions when harvesting this species.

To help you know what you're harvesting, see how to identify bivalve shellfish. 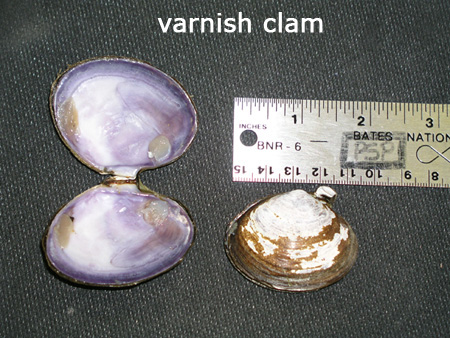 Varnish clams, also known as the purple varnish clam or dark mahogany clam, originates from Asia and is considered an invasive species. Varnish clams concentrate biotoxins at higher levels than other clams and they hold onto the toxin for longer periods of time. They differ from other molluscs in that they are bi-modal feeders; they both filter feed and bottom feed, which may account for the higher toxin levels typically recorded in this species.