NOTE: If you search for labs that test for coliform by using "search for analyte," make sure you select a lab that tests drinking water. 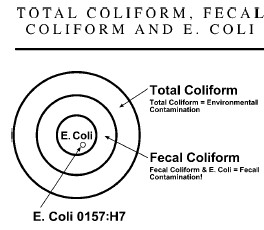 E. coli is a subgroup of the fecal coliform group. Most strains of E. coli bacteria are harmless. The presence of E. coli in a drinking water sample indicates recent fecal contamination and a high risk that pathogens are present.

E. coli outbreaks receive a lot of media coverage. A specific strain of E. coli bacteria known as E. coli O157:H7 causes most of those outbreaks. When a drinking water sample is reported as “E. coli present,” it does not mean that O157:H7 is present. However, it does indicate recent fecal contamination. Boiling at a rolling boil for one full minute destroys all forms of E. coli, including O157:H7.

What if coliform bacteria are found in my water?

When coliform bacteria are found, there should be an investigation to find out how the contamination got into the water. In addition to inspecting the source, storage, and distribution system, an operator of a Group B system should collect additional coliform samples from customers and from the source. Collecting additional samples helps determine whether an actual problem exists. If the lab detects bacteria in any of the additional samples, the initial findings are “confirmed.”

What if total coliform bacteria are confirmed in my water?

If a lab confirms total coliform bacteria in your drinking water, an operator of a Group B water system should more thoroughly investigate to find out how the contamination got into the water. After identifying the source of contamination, the operator can usually resolve the problem with system repairs, flushing, and adding chlorine for a short time period.

What if fecal coliform bacteria or E. coli are confirmed in my water?

Confirmation of fecal coliform bacteria or E. coli in a water system indicates recent fecal contamination, which may pose an immediate health risk to anyone who consumes the water. If E. coli is confirmed, the operator of a Group B water system must notify system consumers within 24 hours of the health risks.

We recommend that the operator of a Group B system with confirmed fecal coliform or E. coli issue a “health advisory” within 24 hours to alert all water users of a health risk associated with the water supply. Here is a public notice template (Word) you can use. The notice advises consumers to use boiled or bottled water for drinking, preparing food, and brushing teeth and explains when the system expects to resolve the problem.

More water samples should be collected to find and eliminate potential contamination sources, and the system should be chlorinated and flushed. The health advisory should remain in effect until the situation is resolved and the water is safe to drink.

Where can I get my water tested?

For a list of certified labs, visit the state Department of Ecology online.

Find out more about

Go back to the Group B Main Page.