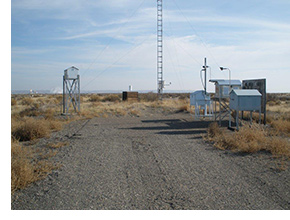 Department of Health's role at Hanford​

The Washington State Department of Health has monitored the environment in and around the Hanford Site for radioactivity near Richland for several decades as an independent party to verify measurements taken by the U.S. Department of Energy, which is in charge of cleanup at the site.

Our role at Hanford is to monitor the environment for any radioactivity that could create a risk for communities outside the Hanford boundaries. We operate 17 radioactive air monitors in and around the Hanford Site to verify air emissions are within regulatory limits. Our staff collects environmental samples on and off the Hanford Site, provides meteorological information, contaminant transport modeling, liaison support with the state Public Health Laboratories, and the Benton-Franklin Health Department. Pictured above right: DOH and DOE air samplers on Hanford with Columbia Generating Station in the background. 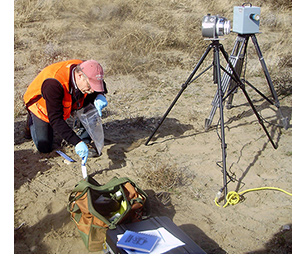 Monitoring and verifying during demolition at the former Plutonium Finishing Plant

In mid-December 2017, we were alerted that demolition work had stopped at the Hanford Plutonium Finishing Plant because an unexpected airborne release of radioactivity was found. The stop work was lifted and demolition activities resumed for two days. Work stopped again when contamination was found at several locations around administration trailers - outside the work-control area.

Contamination was also found on several vehicles. Seven were personal vehicles, which were decontaminated and returned to the owners. Two were driven off Hanford. Department of Energy offered home surveys to workers to check for any contamination. Our staff accompanied DOE staff to verify survey results and offer help to families, if needed. Several homes were surveyed and no contamination was found.

Our role at Hanford is off-site monitoring and we want Hanford employees to be in a safe work environment. As PFP demolition goes forward, Tri-Party members will rely on our monitoring data and expertise about radioactivity in the environment.

For more information about Department of Health's work at Hanford, email RadiationInfo@doh.wa.gov