Note: This page deals with the practice of continuously adding chlorine to water, not the occasional use of chlorine to disinfect wells, pipes, and other water system equipment.

Why water systems continuously add chlorine to their water

Many public water systems add chlorine (a process known as "chlorination") to their water supply for the purpose of disinfection. Disinfection kills or inactivates harmful microorganisms which can cause illnesses such as typhoid, cholera, hepatitis and giardiasis. Sometimes, water systems use chlorination for taste and odor control, iron and manganese removal, and to stop nuisance growths in wells, water pipes, storage facilities and conduits.

Chlorine is also added for its "residual" properties. Chlorine remaining in the water supply, or added after disinfection is first accomplished, is available to fight against potential contamination in water distribution and storage systems that might enter through leaks and pipe breakages. This is called "secondary disinfection."

Chlorine can be added to water as a gas or in the form of hypochlorite either as liquid or solid. Gas chlorination requires more sophisticated equipment and more training to apply safely. Adding chlorine as a hypochlorite is much simpler, requires less training and is safer. If large amounts of chlorine are required, the overall cost of gas chlorination may be lower. 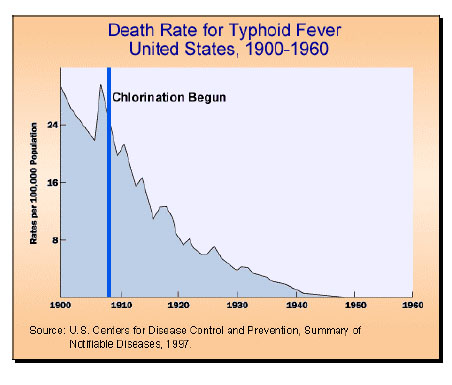 Techniques for chlorination of water supplies were developed in the late 19th and early 20th centuries. In 1908, Jersey City Water Works became the first system in the United States to practice large-scale chlorination on a permanent basis.

As more water systems adopted the practice of chlorination, there was a corresponding decrease in the number of waterborne disease outbreaks. Health professionals regard the chlorination of water as one of the most important advances in the field of public health. As the graph illustrates, waterborne diseases, such as typhoid, caused thousands of deaths annually in the United States in the early 1900s and are now considered rare.

Does chlorination result in harmful compounds?

When chlorine is added to water, it reacts with organic substances that occur naturally in the water. The compounds formed are called "disinfection byproducts (DBPs)." The amount formed depends on the amount of chlorine used and contact time between the organic substances and the chlorine.

Some studies of human health effects from exposure to chlorinated water show increased risk to cancer and reproductive and developmental effects. Other studies show no additional risk. Since there may be potential health effects, the U.S. Environmental Protection Agency (EPA) adopted the Stage 1 Disinfectants and Disinfection Byproducts Rule (DBPR), which specifies maximum allowable levels and monitoring requirements for disinfectants and DBPs. (See additional resources below.)

Is chlorination right for your water system?

The reason your water system chlorinates depends upon the needs of the water system. Most public water systems in the state of Washington use groundwater exclusively. Disinfection alone is sufficient treatment against bacteria and viruses. Since most groundwater has low levels of dissolved organic substances, the formation of DBPs is not a serious health concern. All factors considered - cost , simplicity of operation, and residual qualities - the use of chlorine (as gas or hypochlorite) is a good choice of disinfectant for most water systems.

Disinfection of drinking water, especially when the supply originates from a surface source, is needed to maintain water quality and protect public health. The challenge is to maintain the level of microbial protection while minimizing the exposure of the consumers to DBPs. Research still continues, especially in the field of health effects of disinfectants other than chlorine.