Public water systems are required to deliver safe and reliable drinking water to their customers 24 hours a day, 365 days a year. If the water supply becomes contaminated, consumers can become seriously ill. Fortunately, public water systems take many steps to ensure that the public has safe, reliable drinking water. One of the most important steps is to regularly test the water for coliform bacteria.

What's on this page 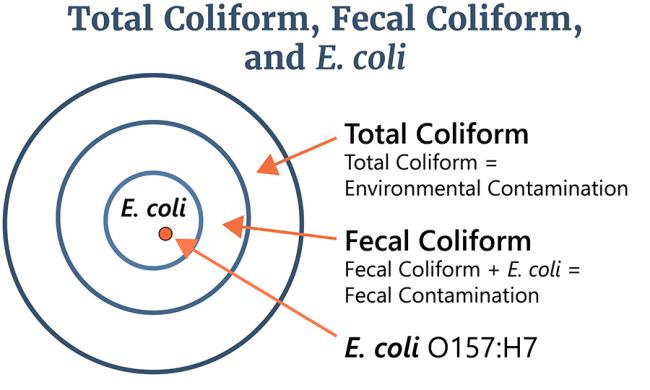 Total coliform bacteria are commonly found in the environment (e.g., soil or vegetation) and are generally harmless. If only total coliform bacteria are detected in drinking water, the source is probably environmental. Fecal contamination is not likely. However, if environmental contamination can enter the system, there may also be a way for pathogens to enter the system. Therefore, it is important to find the source and resolve the problem.

E. coli is a sub-group of the fecal coliform group. Most E. coli bacteria are harmless and are found in great quantities in the intestines of people and warm-blooded animals. Some strains, however, can cause illness. The presence of E. coli in a drinking water sample almost always indicates recent fecal contamination, meaning there is a greater risk that pathogens are present.

A note about E. coli: E. coli outbreaks receive much media coverage. Most outbreaks have been caused by a specific strain of E. coli bacteria known as E. coli O157:H7. When a drinking water sample is reported as "E. coli present" it does not mean that this dangerous strain is present and in fact, it is probably not present. However, it does indicate recent fecal contamination. Boiling or treating contaminated drinking water with a disinfectant destroys all forms of E. coli, including O157:H7.

What happens if coliform bacteria are found in my water?

When coliform bacteria are found, water systems investigate to find out how the contamination got into the water. They collect additional, or "repeat," water samples for testing, and often inspect the entire system. Taking repeat samples helps determine whether an actual problem exists in the system. If any of the repeat samples detect coliform bacteria, the initial findings are considered confirmed.

What happens if total coliform bacteria are confirmed in my water?

If total coliform bacteria are confirmed (at least 2 samples with coliform bacteria present) in your drinking water, your water system should be inspected to find and eliminate any possible sources of contamination. Once the source is identified, it can usually be resolved by making system repairs, flushing, and adding chlorine for a short period of time. The state Health Department works with water systems and utility managers to help resolve such problems.

What happens if fecal coliform bacteria or E. coli are confirmed in my water?

Confirmation of fecal coliform bacteria or E. coli in a water system indicates recent fecal contamination, which may pose an immediate health risk to anyone consuming the water. Responding to health emergencies is the state Health Department's highest priority. A "Health Advisory" will be issued within 24 hours to alert all water users that there is a health risk associated with the water supply. In most cases, the use of boiled or bottled water will be recommended for drinking and cooking. The notice will inform customers of actions being taken to correct the problem, and when the problem will likely be resolved. The department will inspect the system as soon as possible to assist the water system in resolving the problem. More water samples will be taken to find and eliminate potential contamination sources, and chlorination and flushing of the system will most likely occur. The Health Advisory will remain in effect until the situation is resolved and the water is safe to drink.