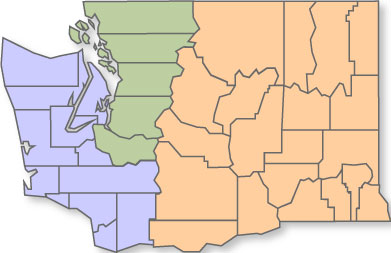 Capital improvements to our public water systems are critical to the long-term health and economic vitality of Washington's communities. Congress established a Drinking Water State Revolving Fund (DWSRF) loan program as part of its reauthorization of the federal Safe Drinking Water Act in 1996.

The program provides low-interest loans to eligible public water systems to build, repair, and redesign infrastructure. Funds are also available for preconstruction and consolidation grants and loans to prepare for infrastructure construction projects.

The Department of Health (DOH) currently administers these programs.

We're advertising our successful projects in a new, more engaging way—through a StoryMap. This is a data-driven way to talk about a project and provides a map tour and synopsis of successful DWSRF projects around the state. Each point on the map links to a description and photo, with a link to more details. We hope this new way to communicate our successes inspires other drinking water systems to participate in our program and gives them new ideas for solving challenges they may face. Visit the DWSRF StoryMap!

Follow the links below to learn more about projects across the state, or view our project profiles in a StoryMap!

The Association had to address a water quality standard violation for arsenic. Levels of manganese in the water supply also exceed recommended levels. This project allowed them to install a water treatment system for arsenic and manganese reduction, build a new reservoir, and replace two well pumps. They also upgraded the existing electrical instrumentation and controls to support the new treatment system. Read about McKee's Evergreen Beach Association's successful project (PDF).

In 2019, the City of Moxee lost its main producing well, drilled in 1983. The loss of this well meant water restrictions for both residents and the commercial businesses in Moxee. The city applied for and received DWSRF and Public Works Board emergency loans. City of Moxee is now able to provide safe and reliable drinking water, as well as meet all customer demands for water. Read about City of Moxee's Emergency Well Project (PDF).

ESLLIC incorporated in 1945 and serves 327 customers. The service area is within the sewer service area boundary of LLSWD, which, under contract operates and maintains the ESLLIC water system. ESLLIC applied for and received a DWSRF improvement loan. In 2016, LLSWD contacted DWSRF about converting the loan to a consolidation project, which was approved. Read more about the Liberty Lake Consolidation Project (PDF) and now it benefits public health.

In 2016, the City of Selah used a Drinking Water State Revolving Fund (DWSRF) loan to replace an old booster pump station and improve Well 7. The existing booster pump station was below ground, unsafe, and difficult to access for maintenance; it could not deliver a reliable, adequate water flow to the distribution system. Read about Selah's Improvement Projects (PDF).

In 2014, the City of Olympia switched from an unfiltered surface water source to the McAllister Well Field, which produces over 10,000 gallons per minute and provides about 80 percent of the city's drinking water. To comply with the Lead and Copper Rule, the city was required to install corrosion control on the new wells. Read about Olympia's Corrosion Control Facility (PDF)

The City of Lynden applied for multiple DWSRF loans to replace their old and undersized surface water treatment plant. The original plant, built in 1926, has serious code and structural issues. It has no room for expansion and cannot meet peak demands, forcing the city to rely on water storage. Read about the City of Lyndens' Water Treatment Plant Replacement (PDF)

In 2014, the City of Mabton used a Drinking Water State Revolving Fund (DWSRF) loan to drill and equip a new well. The city needed the new well to replace a failed well and reduce demand on another well, which drew water with high levels of nitrate. Read more about Mabton's New Well Project (PDF)

The City of Prosser in Benton County provides drinking water to a population of 5,900. The primary water supply is a well field, which has naturally occurring manganese that exceeds the secondary (aesthetic) maximum contaminant level. The water system also has wrestled with its disinfection system and aging infrastructure. All of these problems are being addressed with a series of projects. Read about the City of Prosser's Water Systems Improvement Projects (PDF)

Seattle Public Utilities is nearing completion of its Reservoir Covering Program. The program began in the mid-1990s in response to the Clean Water Act and to comply with state Department of Health requirements. The goal is to cover and secure all of Seattle's reservoirs by 2020. Read about the Seattle Public Utilities' Maple Leaf Reservoir Project (PDF)

The City of Shelton is developing infrastructure to provide water to portions of the Shelton Urban Growth Area and improve service to the northern portion of the city (Mountain View Pressure Zone). The project will construct new reservoirs at two sites, a new booster pump station, replace two existing pumps, and add two new pressure reducing stations to improve operation of the city's water system. Read about the City of Shelton Project (PDF)

Tacoma Water provides direct drinking water service to about 316,000 people in the City of Tacoma, and parts of King and Pierce counties. The primary water supply is the Green River, one of the few remaining major unfiltered surface water supplies in the U.S. However, this source won't be unfiltered for much longer. Read about the Green River Filtration Project (PDF)

In 2010, the City of Vader was facing an insurmountable crisis. The city had experienced 17 system-wide water outages over the past two years as a result of water main breaks they didn't have the funds to fix. The city voluntarily transferred the ownership of their antiquated water system to Lewis County through a state-brokered receivership agreement. Read about the City of Vader Project (PDF)

Clark Public Utilities is working to complete phase one of their multi-phase Paradise Point Water Supply System project. During this phase of the project, they will design and construct a raw water transmission main, backwash line, and two communication conduits from the well field to the water treatment facility. They will also design the water treatment facility and prepare the site for future construction of structures. Read more about the Paradise Point Project (PDF)

Beautiful communities deserve beautiful water. In 2006 the Chelan County Commissioners established the Lake Wenatchee Water District as a result of a public referendum. The district was created to integrate the water supply and distribution system and to replace the five private community associations providing water along the north shore of Lake Wenatchee. Read more about Lake Wenatchee's Consolidation and Improvement Project (PDF)

Pasco is a city on the move. City leaders expect the city's population to double by the year 2027, growing to more than 106,000 residents. To meet that growth, Pasco will need to produce 47.7 million gallons a day – about 12 million gallons a day more than current production. Read more about the City of Pasco's Columbia Water Supply Project (PDF)

2018 Update: In 2015, the City of Pasco used a Drinking Water State Revolving Fund loan to replace an existing intake on the Columbia River. The city treats water from the Columbia River at its membrane filtration plant adjacent to the river, and it needed to replace the existing intake to address seasonal intake clogging due to milfoil, an invasive aquatic plant. Read more...

The City of Pateros applied for a DWSRF loan to address existing water quality and quantity issues. Manganese levels in their public water supply exceed the state and federal maximum contaminate levels. The city's water quantity currently meets our minimum capacity requirement, but doesn't meet the maximum daily demand for water (identified in their water system plan) or their reliability criteria if the largest source is out of service.

Read more about the City of Pateros's Project (PDF)

When Port Townsend residents turn on their taps, they receive water that has traveled from the Olympic Mountains, through a forest, two rivers, two lakes, and 29 miles of transmission pipe. In 2013, the State Department of Health notified the City that conditions and current watershed management practices were such that the planned UV treatment would not be sufficient without additional watershed protection measures. Based on a qualitative comparison and the relative costs of filtration vs. enhanced watershed protection, the City elected to build a new water filtration plant. Read more about the City of Port Townsend's Filtration System and Reservoir Project (PDF)