Measles is extremely contagious, and can be serious, especially for young children.

Measles, also called rubeola, is the most deadly of all childhood rash/fever illnesses. It is a leading cause of death among children worldwide. The Centers for Disease Control and Prevent has information about measles outbreaks nationwide.

There are confirmed cases of measles in Washington every year. The best protection against measles is to get vaccinated. Make sure to protect yourself and your children with the measles, mumps, and rubella (MMR) vaccine. 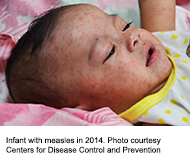 After a few days, a rash begins, which usually starts on the face and can spread over the entire body.

In some people, especially people who are have chronic medical problems, are pregnant, or are malnourished, measles also leads to serious problems such as pneumonia, brain damage, blindness, deafness, and death.

About the MMR Vaccine

Kids should get two doses: One dose between ages 12 and 15 months, and the second between ages 4 and 6 years. If your family will be traveling outside the United States, your baby may need to receive their doses earlier than this.

Adults born after 1956 may need a dose of MMR if they have not already had it.

Talk to your healthcare provider to get the MMR or MMRV vaccine for your children. Washington provides MMR and MMRV vaccines at no cost for kids through age 18, and they're available from healthcare providers across the state. Providers may charge an office visit fee and a fee to give the vaccine, called an administration fee. However, if you can't afford the administration fee, you may ask your provider to waive it.

Watch Making a Disease Disappear (a TED Talk at the CDC)

For Parents and the Public

For Schools and Child Cares

Measles Information in Other Languages